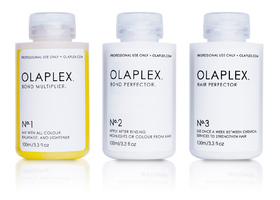 INSURANCE FOR  HAIR
One ingredient changes everything.
The ORIGINAL chemistry that multiplies bonds and cross-links broken bonds. There can only be one!
Go Blonder- without compromising the integrity of hair.
From Base Color to Balayage, Olaplex multiplies bonds making hair stronger, healthier, while color lasts longer with more vibrancy.

WHAT IS THIS STUFF… OLAPLEX?

It is a complicated but simple chemistry. It's a chain that links sulfur/hydrogen bonds together. These bonds are created when chemicals split sulfur bonds apart and they attract hydrogen's. If Olaplex did not couple and link the bonds, oxygen would interact in two different ways. The good reaction is when one oxygen attaches to the hydrogen and the sulfur kicks it off. These single sulfur's attract back to other single sulfur's reforming the hair bond. The bad reaction is when 3 oxygen's attach to the hydrogen and the sulfur likes them. This new molecule is a sulfate group that leaves the hair dry and damaged. That's the Olaplex chemistry.

Billed as a two-step process to rebuild and perfect the hair’s disulfide bonds, Olaplex lightens hair with less damage--which is why it has become something of a holy grail to hairstylists worldwide.

If you immediately said "That sounds a lot like Breaking Bad," you'd be right—Olaplex has had something of an immediate and addictive effect on the industry.

To make an appointment, please call:

Sun-Mon -we are closed